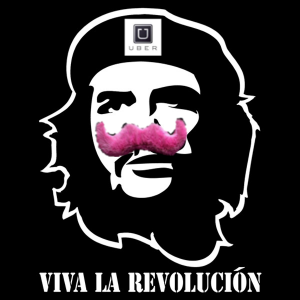 You say you want a revolution. Well, there’s an app for that.

Since I’ve talked about AirBnb in my previous post, I should amention that I’ve been a user of another ‘sharing economy’ darling in the past few months : Uber.

I used Uber to drop me home after getting rid of the MB leased car.

I used them to take me to the airport where I was going to Milwaukee for thanksgiving and to avoid the parking nightmare. By co-incidence, the driver was from Wisconsin so I got a few tips from him of what to see etc. As a side note, the officials at Hobby Airport pounced on him for documentation as soon as I got dropped off and even after I’d checked in my luggage about 10 minutes later, I could see out the window he was still being questioned. Not sure what that was about.

I used Uber in Milwaukee to get to / from downtown. The ability to send the driver a text – when the GPS address for your restaurant is nonsense – worked great. On the app map showing the driver, you could see them driving to you, then obviously overshooting and going the other way.

One feature I liked was the quote before hand to do a ‘what if’. I wanted to know the price of an Uber from Milwaukee to Midway airport  – around ~$120. I compared it to AVIS one way where the car rental gave me ( with a very good AWD#) and it was around $55. Obviously with this, I went to AVIS. When I checked the car in, I was dismayed to find out that they’d charged me per mileage charge where bill came to $108. Bloomin’ bunch of Sock cutter$. If I add in tolls, gas and CDW then Uber would have been cheaper.  Even if it had been cost neutral, I would have not had the hassle of driving for 90 minutes and getting to the MKE airport to pick up the car.

As for AVIS and the discrepancy, I later I checked out why I had not flagged this earlier as I darn well knew about the potential for one way add ons. I looked and the AVIS booking site was blank about mileage but when I looked at the confirmation email, it calls it out as $0.40 per mile. Buggers.  Today, I just looked at the same AVIS website today, and it does now call it out (@ $0.28 per mile). So Caveat Emptor (or Emperor..) and all that with my miscalculation on the 1 way rental but it still illustrates why bother with that option : Just get an freakin’ Uber assuming their prices stay where they are. I mention this as they continually monkey with fare structures.

The thought of getting a regular taxi driver when Uber is an option, does not appeal any more. I’ve had my fair share of rides with filthy cars overflowing with cigarette butts going to a destination with no idea what the final charge will be and they’ll only take cash at the end. The days of taxi’s are done in areas legally serviced by Uber, Lyft or their counterparts.

PS: I am not ready to give a full thumbs up to Uber as I don’t trust Mr Kalanick past the future IPO.