The Environmental Protection Agency (EPA) is calling them out for cheating and are referring to this a ‘defeat device’. The State of California is also piling on. If you look at comments on New York Times, a bastion of liberalism, many drivers of VW Diesel are very upset and while they are thankful for the per mileage improvement, they are aghast that their green image is more dirty grey. END_OF_DOCUMENT_TOKEN_TO_BE_REPLACED Continue reading..

A sleep at the wheel : The day my Car was attacked by a matress 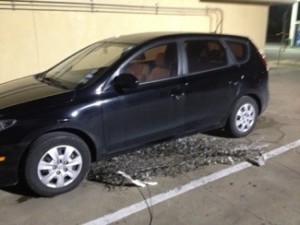 Augustus’ chariot with a uninvited guest attached to the bottom

I found this picture on his phone and it brought back memories. Unpleasant memories at the time but funny now.

It was a cold winter’s night around 8:30 pm on Monday where I was driving down I10 to Houston from Austin. The section of freeway was unlit and the road was quiet.  I had just changed into the right lane and saw the driver in front swerve around something. Since there was a car passing on my left, I had nowhere to safely go apart from straight on.

I braced from a crash and drove over whatever it was on the road. There was an ugly scraping noise and whatever the object was, it was now under the carriage. I was driving down the road with sparks coming out of the sides.

I pulled over and got out to take a look. By the passing car headlights,it was something metallic. More importantly, it was stuck.

Luckily there was a turn off nearby and I slowly drove off the freeway to a gas station nearby which was well lit.

At the garage, I could better see what it was: the remains of a mattress that was now just springs and wires.

I tried pulling it, it moved somewhat but was trapped in multiple places under the car.

Now what to do? The toolkit in the car had including pliers but it would not cut the wire.

The garage attendant didn’t have phone number for a local tow truck. The idea being to hitch it up and pull it away was out.

The phone was dead so could not look up anything on the internet.

So there I was. Cold, frustrated and Stranded. This was like one of these management challenges that they give to teams and with no other options it was try, try and try again.

By chance I managed to loosen it to the front enough by standing on it with left foot and slowly reversing the car with the other. This allowed me to jack up each front tire and remove it to further pull it away. 50 minutes later I was back on the road again. Very pleased with myself but equally pissed off with idiot who had lost their mattress and had not secured their load. A common problem in Texas.

Still there is part if this story that still makes me chuckle whenever I think about it. The name of the town that I had just passed…..SEALY.

For those that may not know, Sealy is a famous manufacture of mattresses.