The Environmental Protection Agency (EPA) is calling them out for cheating and are referring to this a ‘defeat device’. The State of California is also piling on. If you look at comments on New York Times, a bastion of liberalism, many drivers of VW Diesel are very upset and while they are thankful for the per mileage improvement, they are aghast that their green image is more dirty grey. 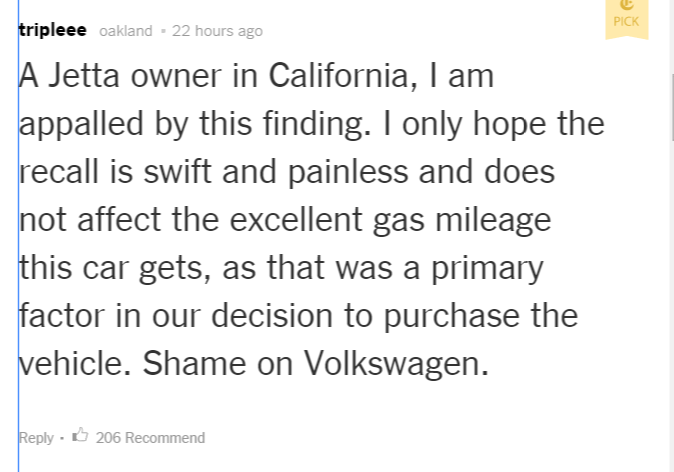 One upset New York Times Jetta owner who was so angry, they wrote a stern comment.. That will show them.

However, the threat to VW is not the names that they are being called, but the sticks and stones that may break their bones.  This problem has a very real business impact:

However, VW are not the first to mess around with emission software on cars. In 2007, EPA settled with Casper Electronic for $74,000 penalties where Casper had been selling aftermarket devices which gave false signals back the malfunction indicator light (Check engine light) that indicated when Catalytic converter no longer worked.

Casper’s sold over 44,000 O2 Sims before further sales of these illegal “defeat devices” were halted as a result of EPA’s investigation and follow-up enforcement action. These devices were advertised for “off road use only” or “non-road use only.” However, the O2 Sims were designed and marketed to be used in regular production vehicles (“on road” or “on highway” vehicles), which is illegal under the Clean Air Act. In addition, while there are different control standards for “off road” vehicles (e.g., construction equipment) because of differences in the types of engines and applications, there is no general “off road” use exemption from the pollution control requirements of the Clean Air Act.

EPA has also gone after other car manufacturers relating to “the environment”. In 2014,  they settled with Hyundai and Kia for false mileage claims where Hyundai settled for $100m fine, However, that was not the end of it. Hyundia also had to spend $50m to set up a compliance office, lost $200m in ‘green credits’ plus a class action settlement to people who had already bought their cars. Hyundai’s defence was that the standard was difficult to interpret. (Check out this site for Hyundai’s side of it). My understanding is that the EPA is changing the standard.

I also would like to know how the same cars pass Euro5 and Euro6 (which went into effect September 2014) standards.  There are claims that the  actual emissions from Diesel cars are x7 higher than EU / US regulatory limits. If so, the impact (to number of cars) in Europe is bigger in that diesel cars are more common.

I await to see how VW explain this one where there is also talk of criminal charges but don’t hold your breath.

By the way, as a measure of federal fines.