Warning: Cannot modify header information - headers already sent by (output started at /home/roads25/public_html/wp-content/plugins/HoverAlls/hoveralls.php:14) in /home/roads25/public_html/wp-content/plugins/wp-super-cache/wp-cache-phase2.php on line 62
 Yelp me if you can, I’m feeling down : US guest house fines reviewers for negative reviews | Roads-2-Roam.com
1

Yelp me if you can, I’m feeling down : US guest house fines reviewers for negative reviews 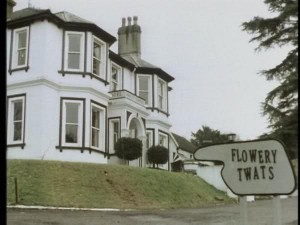 One of the opening scenes of the BBC Comedy, “Fawlty Towers”

The internet outrage de jour is the story of  “Hotel fines $500 for every bad review posted online” started by NY Post. Except when you read it, you find out it wasn’t a hotel but a small guest house.

The Union Street Guest House, near Catskills estates built by the Vanderbilts and Rockefellers, charges couples who book weddings at the venue $500 for every bad review posted online by their guests.

“Please know that despite the fact that wedding couples love Hudson and our inn, your friends and families may not,” reads an online policy. “If you have booked the inn for a wedding or other type of event . . . and given us a deposit of any kind . . . there will be a $500 fine that will be deducted from your deposit for every negative review . . . placed on any internet site by anyone in your party.”

If you take down the nasty review, you’ll get your money back.

For any bad reviews that do make it online, the innkeepers aggressively post “mean spirited nonsense,” and “she made all of this up.”

In response to a review complaining of rude treatment over a bucket of ice, the proprietors shot back: “I know you guys wanted to hang out and get drunk for 2 days and that is fine. I was really really sorry that you showed up in the summer when it was 105 degrees . . . I was so so so sorry that our ice maker and fridge were not working and not accessible.”

That is pretty much the article. No names to the quotes.

After the article went viral, the media really pilled on. Around lunchtime, we saw the hotel headline on Poxnews (a stable mate of NY Post) as we walked past a TV.

The Yelp site that reviews Union Street Guest House is now out of control with ‘outraged’ people who went on Yelp to add their 1 star even though they may never have visited the place. Yelp have since culled ~900 of the post-news postings but still it is useless to use now for an objective review.

Funnily enough, if you went to TripAdvisor we see a 4/5 review with many positive comments. There are a few negative comments mainly about the lack of interpersonal skills of the owner, so what to make of it all.

A day after the New York Post publicized the Union Street Guest House’s posted policy to charge guests $500 for bad online reviews, the Internet piled on the Hudson Valley hotelier’s Facebook page as well as Yelp, which has removed more than 3,000 posts it deemed inappropriate.

Although the hotel Monday removed the $500 policy from its website and said it was a joke, at least one bad review posted on Yelp in 2013 states the owner did indeed try to collect $500.

“I’ve also read the reviews from guests saying we tried to enforce the negative reviews policy on them and for that I apologize,” Wagoner said in the letter. “It was never my intention for anyone to pay this fine. The instances where an attempt was made to collect the fees were a breakdown in communication between my staff and me, and for that I accept full responsibility. Including the fine for negative reviews as part of our policy was a mistake. That’s not the type of business that we run. It was a case of a joke gone very, very bad.”

However, this is NOT a way to drum up Hospitality business and more like real life Basil Fawlty rather than Conrad Hilton. Should you wish to continue in the same manner, we suggest you embrace the negative publicity and simply change the guest house name to the anagram shown in the picture.