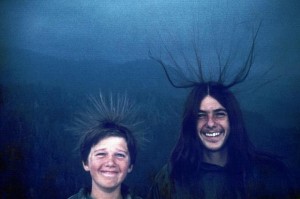 Sunday 13th July:  Roads-2-Roam read about a second death in only 2 days from lightning strike in Rocky Mountain National Park in Colorado. Both had occurred on Trail Ridge road near or at Ute Crossing Trail. The one on Saturday impacted 13 people whereas 7 people were injured on Friday.

Per the usatoday article:

Park officials are reminding visitors of the dangers associated with being above tree line — or more than 10,000 feet. That area is very exposed and there are few places to take cover.

Park rangers say visitors should head to lower ground by 12 p.m. to avoid being caught in a dangerous storm.

Prior to this, the last fatality due to lightening in Rocky Mountain National Park happened in 2000 so this seems like a statistical anomaly.

Reading around for information on this we found a stupid CBS article claiming this happened during “heavy monsoon rains”. Oh for crying out loud: The US does not have monsoons. What the US does have is instead is morons,usually lazy reporters.

Now back to the topic of lightning. Years ago, Augustus remembers one of an Irish friend tell us about a time hiking in the Rockies when a storm hit. He said “It started as fun but the scary thing was there was nowhere to shelter. There was blinding white flashes and I ducked as low as possible and was glad to make it out alive”.

There is not too much to say about the Colorado event from the articles but there is advice to disseminate about lightening and higher altitudes. In 1975, Michael McQuilken (right) and his little brother Sean were visiting Moro Rock in Sequoia National Park with family. The famous photo made the internet rounds where as the weather worsens, their hair is standing up due to static electricity. Moments later they were struck by lightning where Sean had third degree burns.  He was luckier where a man nearby on the top of the rock died. Another was unconscious for six months.

Today, Mr McQuilken is blogger telling everyone about the dangers of this tell tale sign: if your hair starts standing on end on the top of hill seek shelter immediately. You are in danger of a possibly fatal bolt from above.

But as some wag posted in comments of Daily Mail: “I am bald. Does that mean I am safe?” Nice try.

One of the best articles we found that explains lightening is by an amateur “The Natural Handyman”.

Level-5: USE THIS ONLY AS A DESPERATE LAST RESORT! If you are outside and far away from a safer place, proceed to the safest location. If lightning is imminent, it will often give a few seconds of warning: hair standing up, tingling skin, light metal objects vibrating, seeing corona discharge, and/or hearing a crackling or “kee-kee” sound. If you are in a group, spread out so there are several body lengths between each person. Once spread out, use the lightning crouch – put your feet together, squat down, tuck your head, and cover your ears.

When the immediate threat of lightning has passed, continue heading to the safest place possible. Remember, this is a desperate last resort; you are much safer following the previous guidance and avoiding this high-risk situation.

If you still want more lightning fix, check out places in the US that have the most thunder storms courtesy of google. Florida is the largest but Denver is up there among the highest. Florida is also unenviable top place of deaths since 1951, with number 2 followed by Texas.

Something we also came across was number 1 activity that results in being hit by lightning. Can you guess ? Golf you may say. Nope. It is fishing.

Some good information in those articles and some of it is not obvious if you were not already aware of it. Stay safe out there.