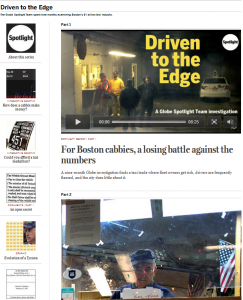 An undercover reporter who got a Carriage licence, details how the company treats its drivers by nickel and diming on smaller items like gas in the tank (it claims drivers don’t fully fill up so charges them extra to top up as their rate) and how it’s drivers pay for their cabs – Put the money in a clear envelope drop box with no receipt – and then later claim it is short. To get fares, the drivers have to slip backhanders to the dispatcher to get fares.

What is shocking was the value of Boston cab’s medallions : worth $220m !

The Globe article is split into 3 parts and part 2, discusses the under scam insurance of Boston Cab and other to when it comes to cover serious injuries.

For one thing, Tutunjian and most other taxi owners buy far too little insurance to cover serious injuries.

The three cabs involved in the accidents, like about 80 percent of the other taxis in Massachusetts, were operating with the state minimum bodily injury coverage of $20,000. That’s a fraction of what most motorists buy for their own cars, even though, according to the state Division of Insurance, cabs have seven times the accident rate of ordinary vehicles.

That coverage is less than half the $50,000 required of bicycle messenger services in Boston. It’s also a tiny percentage of the $1 million coverage mandated at Logan International Airport for unmarked black cars known as livery vehicles.

And it’s allowed because the Legislature has repeatedly ignored proposals to mandate more insurance for taxis.

Mark Jenkins, a Peabody software entrepreneur whose girlfriend suffered a permanent brain injury in a 1994 accident with a Revere taxi that had only $20,000 in coverage, said he has testified at the State House four times since 2001 in favor of raising the minimum required cab insurance.

Tutunjian takes this unlevel playing field and tilts it even further in his favor. Relying on a little-used provision of state law, he self-insures his cabs by depositing money in interest-bearing state accounts to cover his fleet, instead of paying premiums.

Like many other fleet owners in Boston and elsewhere, he also divvies up his 372 valuable taxi medallions into dozens of corporations, which makes some potential litigants think that a cab in an accident belongs to a small business with modest assets rather than a transportation giant.

In addition, Tutunjian denies any responsibility for the errors or negligence of the people who drive his taxis, because he and other fleet owners consider cabbies “independent contractors’’ rather than employees.

WOW. And the Taxi industry criticize Uber and Lyft for not being appropriately insured. It almost makes you question if you should go to such as place as Boston, in that these cabs are liability hazards. They cause an accident to you and you’re on your own for your medical bills. Shame on Boston Politicans for not sorting this out.

This is not a Boston problem by all accounts. An 1998 Texas Monthly article, explains what it is like to be a Yellow Cab taxi driver in Houston. It sounds very similar to the above in the leasing out the medallions.

No wonder many taxi drivers wish to jump over to Uber and Lyft. They will be treated better. This whole Big Taxi Medallion  scheme is a Racket and we call for it to be overhauled or abolished. Their existence is not for the public good.

FEED THEM TO THE LIONS