After checking in, we couldn’t believe the contrast between the room and the reviews. Admittedly, it was smoking room that we had been warned about at checking, Trajan was nevertheless shocked by the room. There was no way that this hotel was a 4 out of 5 star rating despite what multiple people had claimed.

So we went back and looked at the reviews and specifically the reviewers who gave such opinions. Of notice was: 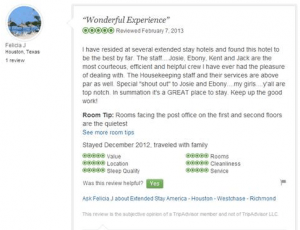 Example of glowing review posted on hotel Trajan stayed at based on extremely positive reviews. Our experience wasn’t so gushing.

a) the number of people who had 1 review only.

b) the numbers of people with 1 review only had registered their home town as Houston. Afterall, how many people stay in the hotel in you same town?You’d just drive home right.

c) The amount of people who specifically mention not just 1 name of someone working there but almost every single person working the front desk. Really? I would just summarize it as “friendly front desk”.

d) The reviews from people from out of town, were not so glowing.

We suspected the rating were fake reviews for this hotel only but had mentally filed it was to look into TripAdvisor some more at a later date.

Now comes the BBC story, we dusted this out to be top of our rant pile.

So how prevalent is the false reviews. If you read some of the related stories on the BBC news site, you read one from Jan 2014 where a Scottish guest house sued to get a bad review removed.

In their petition, the couple said: “The postings purported to review events that did not take place. They were not reviews submitted by actual travellers.”

It is alleged that the reviews were submitted contrary to the rules of TripAdvisor and that the postings were not made contemporaneously.

Both writers claimed to have visited the premises in September 2011, but the reviews did not appear until February and March the following year.

The weaselly TripAdvisor response to this:

Paul O’Brien, counsel for the travel website, said there were pleadings set out that TripAdvisor had a place of business in England, but its position was that its place of business was in Massachusetts, in the US.

He said: “I am told TripAdvisor maintains its computer systems in the US.”

Mr O’Brien said that even to recover information from other parts of the UK the court would issue a request to a court in that part of the country.

Basically screw you: We are outside of your legal jurisdication and there is nothing you can do about it.

There is a second related story from 2012: A rebuke from the UK’s Advertising standards.

The ruling follows complaints by hotels that the site had said that its holiday reviews could be “trusted”.

The ASA said it was concerned that consumers might be fooled by fraudulent posts since the entries could be made “without any form of verification”.

TripAdvisor described the ruling as a “highly technical view” of “copy that was used in a limited capacity”.

However, the watchdog said that the ruling served as a warning to all UK-focused sites with user-generated material.

Not being aware of either of these, we did a quick google search. In the top right, we saw a Trip Advisor logo which had a cartoon of an owl and beneath it, it say “WORLD’S MOST TRUST TRAVEL ADVICE”. After reading the above ASA ruling, we clicked on it and surprisingly, it took us to tripadvisor-warning.com/pay-for-reviews.  Their logo is a parady of the owl but “Tripad Liars”.

Oh goody we thought: a fight on the internet. Looks like they spent a bit of time on this. From tripadvisor-warning.com:

For years now TripAdvisor has allowed anyone to post horrendous lies and libelous reviews on their site. They refuse to check, or validate these reviews, and once posted it is nearly impossible to have the review removed. We believe TripAdvisor has done enough damage, and we will show how easy it is to use TripAdvisor as a platform to post Lies, Libelous and damaging reviews.

There’s a lot of content on this site on people who have complained about false negative ratings but TripAdvisor will not change them. Particularly bothersome is the evidence about the side business of pay for reviews. Even the site offers to get you positive reviews for you for a payment. 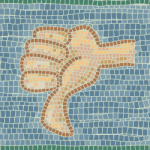 So we’ve discovered enough doubt to trust the objectivity of TripAdvisor rating system. We have read enough evidence and announced our verdict : Thumbs down if you are using it to assess a business. There is too much conflict of interest. The site is too open and not enough care in adjudicating complaints against such reviews. While Roads-2-Roam believes in freedom of speech, we don’t believe in tyrany of the masses and TripAdvisor’s business model does not seem to balance that too well.

However, even without changes that we believe will ultimately come, Roads-2-Roam believes TripAdvisor it has some value as a travel planning tool especially for assessing attractions. We struggle why anyone would give those a false review although you have to second guess the taste of the reviewer: What may be an attraction to them may be a repellent to you. Read a sample of the comments, not the ratings, to get a feel for the spectrum.