Fool me twice, Shaman you.

After reading the story, Roads-2-Roam was already to join in the overwhelming chorus of people calling for Delta’s blood on how they dealt with a paralyzed man. Afterall, who could argue with this: 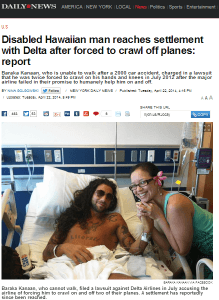 Baraka Kanaan, who is unable to walk after a 2000 car accident, charged in a lawsuit that he was twice forced to crawl on his hands and knees in July 2012 after the major airline failed in their promise to humanely help him on and off.  [source NYDaily news]

The other parts to the story being:

Kanaan is a College Professor who ran a ‘501c3’, called 48 hours ahead requesting wheelchair access. It appears the flight was delayed 1 day. The facilities were not present at Nantucket airport.

After the original incident, he complained but similar thing happened on the return flight.  Pieces of cardboard were placed for him to crawl across the tarmac.

Delta offered him 25,000 ‘sky miles’ and a $100 voucher. He refused the offer, however, in fear that any future flights might again have him crawling on his hands and knees.

This was going to be a slam dunk “Feed them to the Lions” piece about theworst customer service EVER.

Except, there were things niggling Trajan when he read the piece.

First the story itself: it was outrageous. Who would realistically allow this? Twice?

Second was the picture of the claimant  that many of the main stream media pieces was using. This is from the claimant’s Facebook. Come on – Who the heck wears sun glasses in a hospital bed? This guy is a Professor? We are now seriously curious to learn more about him.

Trying not to judge a book by it’s cover, Trajan re-read the articles and decided to check out ‘D. Baraka Kanaan’ and the specific “charity” he leads.

OK, so it then too much of a surprise to find out his internet site is dreamingbear.net. According to the website Dreaming Bear is: Nature’s Poet Laureate; an Author and keynote speaker; a World-class Musician; Environmental Peace Activist and last but not least, Founder of the Lovevolution.

The front page has some interesting quotes praising Baraka:

“Baraka is the very epitome of the essence and meaning of yoga!” ~ Tao Porchon-Lynch

Really? The meaning of Yoga. It get’s better..

“If you gazed up at the night sky from Jupiter, Saturn or any other place in our solar system, you’d see many celestial bodies—including one called Planet Earth. The inhabitants of this heavenly body are heavenly beings—who are waiting for a poet to remind them of this. enter Baraka…

Our B-S meter is reaching 11, so we headed off to look at the Lovevolution Foundation.

The home page attempts to explain what it is all about except the explanation is gibberish.

We see it is written in English. We understand each word. We see those words form sentences. We read, re-read and read again but we still had no idea what on earth it was was saying and what the Foundation is about. Maybe that is the point. Obfuscation.

Here is an excerpt:

“The Lovevolution Foundation is a Maui-based, globally active educational 501c3 organization. It is dedicated to creating a social movement that encourages global transformation. Together with community leaders, Earth conscious organizations, and inspired thinkers of our time, the Foundation creates innovative, multimedia, educational materials that are presented to t

he public as live broadcasts, theatrical events, concerts, lectures, and other kinds of performances. The Foundation’s goal is to engage audiences in exciting, intelligent, and entertaining reexaminations of such issues as world peace, environment/sustainability, social justice, and creative self-actualization”.

Our eyebrows couldn’t be raised any higher.

So being a Charity, we expected to find public reports out there. It was registered with the IRS in 2010 but cannot find any reported revenue. According to nonprofitfacts.com, Lovevolution is registered as a small exempt organization (less than $25K revenue) and required to file a 990-N (also known as an E-postcard). According to charitynavigator.org, their last 990-N filed was December 2013 but it is not viewable online. 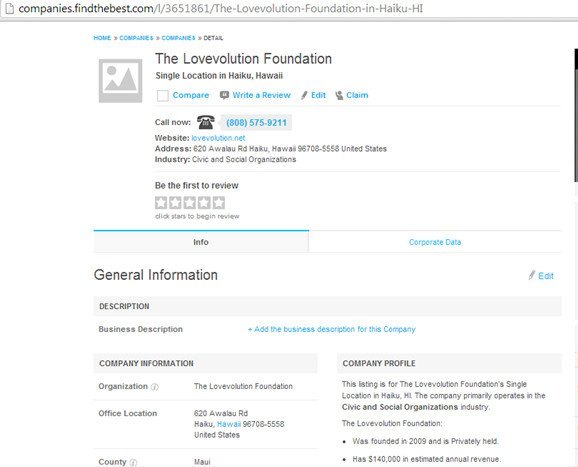 Of interest is prior to registration as a 501c, Lovevolution Foundation appears to have been a private company in 2009 with revenues of ~$140K. 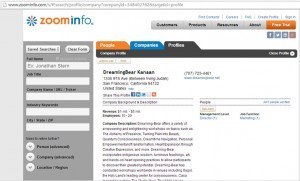 Going back even further, we see that dreamingbear.net was at on time registered in California under “DreamingBear Kanaan”. where reported revenue $1M to 5M.

So what happened? All thing point to more revenue activity not less. Let’s take a look at Lovevolution Foundation website again and we see it continually talks up “All donations are tax deductible. Tax ID 37-1576756”.

The biggest surprise, we found related to Lovevolution Foundation was their statement that you can go on vacation and claim it as a tax deductible: 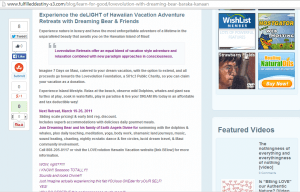 “Imagine 7 Days on Maui, catered to your dream vacation, with the option to extend, and all proceeds go towards the Lovevolution Foundation, a 501c3 Public Charity, so you can claim your vacation as a donation.

That sound great apart from one thing: the specifics of IRS publication 526 on charitable deduction specifically on travel.

In the Lovevolution Foundation instance, it is being specifically called out as a vacation and then tells people it can be deducted. Eyebrowse raising time again.

So let’s look into the  founder of the Foundation himself. Dr Kanaan claims a PhD. First question is thus, from which educational establishment did this come? Looking at Yatedo.com, Mr Kanaan has 2 Masters from California State, One is performing arts. A 2008 Amazon bio has 2 Masters degrees with 2nd in “Native American Philosphy” not yet complete (we assume that it is complete by 2014) but what about that PhD.

There is a claim to be “1/2 Cherokee” in particular to be a Cherokee Shaman. We didn’t find much info to support this. On the contrary, what we found was many people disclaiming this. On his Middle Eastern roots, there maybe some validation to that. We found Kanaan’s use of Kanannite@hotmail.com in a 2002 Barnes and Noble book briefing where Canaanite refers to: Canaan and Canaanite people, a historical/Biblical region and people in the area of the present-day Israel, Lebanon and Palestinian.

However, We’d like to know Baraka Kanaan before his days in Mauii. Someone said on a discussion board that his real name is Micheal Kannan or Kanan (?) when he was in California. We drew a blank here finding out more info. (We’d also like to know when ‘Baraka’ got added as a name as it sounds very much like another person who lived on Hawaii and now lives in Washington. In early versions, Baraka was plain DreamingBear Kanaan.)

Probably one of the best discussions on ‘D-B’ as she calls him is from a blogger “Cosmic Connie”. Please take the time to  a read her posts on DreamingBear who she first met in 2007 during Burning Man. At that time,  Connie called him a “Whirled-class pseudo-mystic, ersatz American Indian, phony Poetry Man, and genuine poseur” and summarized him as “New Age Lounge Lizzard”.  Of interest is a 2008 post, where she commented about his migration to a wheelchair and questioned if it was indeed a prop. Others in the comment section add weight to that.

Which brings us on to videos of Baraka himself. Appended to this bottom of this post are some youtube videos that show Kanaan walking across a beach in the middle East, and another of him jumping about on stage. This are 2009 onwards. There were apparently youtube videos of Kanaan out there that have recently been made private.

Someone one said there are three sides to every story: Yours, Mine and the Truth.

Bottom line is we remain skeptical that Kanaan really had to drag himself (twice) across the tarmac like claimed in the case. We also are skeptical of his new age Foundation.

As for Delta. We are no lover of Delta. Fact that the case got so far meant Delta had some culpability especially if Kanaan requested such facilities upfront and it was not delivered per contract. There are others have made complaints  against Delta about how they treat people with Disabilities and they have been appropriately fined for it. We suspect there is more to this what has been presented in the press but doubt Delta deserve such scorn in this instance. We would not be surprised that Delta’s lawyers took the cheapest way out and decided to just settle the case.

So the truth is likely somewhere out there but we will never know as the case was settled under a non-disclosure agreement.

Somehow, I also don’t think we’ve heard the last of DreamingBear and Lovevolution Foundation. This guy looks like he has a planet sized ego that we all need to hear about whether we like it or not.