Warning: count(): Parameter must be an array or an object that implements Countable in /home/roads25/public_html/wp-content/themes/focusblog/inc/configs/theme-options.php on line 379
 Baggage excesses : Problems with baggage system at Heathrow’s Terminal 5 | Roads-2-Roam.com 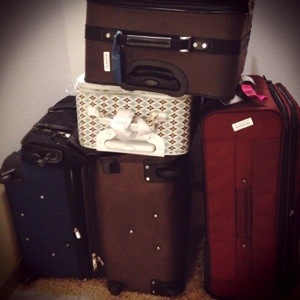 From the UK Telegraph 7/4/14 : Heathrow Terminal 5 baggage: no bags for a week

Problems with the baggage system at Terminal 5 between Thursday and Sunday meant that thousands of British Airways passengers’ bags were not loaded onto their flights.

A Heathrow spokeswoman said the computer glitch meant some bags had to be processed manually, which “led to some bags not making flights in time”. BA – the only airline to operate from the terminal –said it has been working “around the clock” to reunite customers with their bags, and that all bags had been dispatched by the end of Tuesday.

However, it added that the nature of international travel, complex security issues and customs regulations meant that it may still take several days for passengers to receive their belongings. Travellers have been expressing frustration and anger at the way BA has handled the situation

While this is a serious problem it is in fact, history repeating itself. When Terminal 5 opened in march 2008, the very same thing happened on the opening day. Over 28,000 pieces of luggage were pilled up. It took over three weeks for some passengers to finally get their luggage back with many losing their bags.

So what are your rights for lost luggage? The Telegraph article expands on this:

airlines are obliged to cover costs of “essential items” such as underwear and toiletries, for which compensation should come in the form of an upfront cash payment, a fixed daily budget or remittance once your claim and receipts have been submitted, normally to a value of £100-£200.

The law that governs this is Montreal Convention. This was made effective in 2003 and compensates you up to ‘1311 SDR’ per checked item. What is SDR? Good question: It refers to Special Drawing Rights and is a mix of currency values establish by the IMF. Still confused – so are we. We found this unhelpful SDR converter on the IMF site. In a nuthshell, 1 SDR is approx $1.55.

This is a significant improvement to the prior Warsaw convention where compensation was based on Weight of bags only. In addition, the airlines have 21 days to find it before compensation begins so you may be without your clothes for a long while.

However, Good luck in getting maximum payment though. Trajan found this out first hand where Air France lost his luggage on a connection to Vienna via Paris-CDG and we never got re-united with it. In fact we spent more money on international telephone calls than what we got back. He also remembers not being able to connect with anyone in Air France customer service as it was public holiday weekend. [As a side note we read about baggage handlers in CDG being jailed for theft. At the time we wondered if they were ones who stole our stuff. Read the article and see how many arrests there have been over the years.].

While British Airways is the airline and the one being tarred by the fiasco, T5 is run by British Airports Authority. It seems that BA doesn’t have much luck when it comes to lending its name to things mechanical. Back in late 1990’s, it sponsored the London Eye (the viewing wheel in London, near the House of Parliament) where it was scheduled to open for millennium. Guess what happened: It missed the 1999-2000 change over due to a clutch problem.

Still we have a problem with BA in other ways and Roads-2-Roam is boycotting them until they change it. We have a major problem with their policy for booking a seat outside the 24 hour check in window where you have to pay between 10 GBP ($16) and 60 GBP ($96) just to get a seat. This is ridiculous especially if you are traveling as a family and want to sit together. Perhaps BA is wishing to live up to their alternative name : BA = Bloody awful.