Tickets to Ride : Police of a Notorious Speed trap city gets disbanded In a follow up to our post  “Ghosts of Waldo” where the Waldo Police Department was disbanded, AAA is reconsidering the need for a billboard to warn motorists about Waldo being a speed trap. [Source Daily Mail though the Mail does mess up the road. It is 301 not 310].

However, one commentator “grneyedmnstr, Tampa, United States” to this article said:

I drove through Waldo Thursday night and again on Sunday afternoon coming back from my trip. Both times there were lights and sirens every few blocks with people pulled over–mostly tourists. The whole town is about 3 miles long and you crawl along at 30 miles an hour. Lawtey is just as bad. Nothing has changed.

The Ghost of Waldo

“Glad tidings we bring, to you and your Kin”. No, it’s not Christmas time but an early present: Waldo City Council, Florida has voted 4-1 to dissolve it’s police force.

To recap, Waldo is one of the two cities in America labelled by “AAA” as  “traffic traps”. These are cities that go out of their way to raise revenues from ticketing drivers passing through where their overzealous speed system, trips up users – see our previous article “Where’s Waldo? In Jail hopefully”.

The Waldo Police officers blew the whistle on their Chief  at a public meeting, for giving them ticket quotas to meet. This was illegal under Florida law.

There is now one less public menace to the motorist but their sister city, Lawtey, still exists. Drivers on Florida US301 beware. 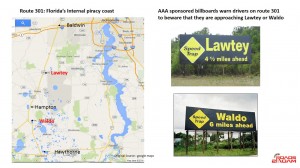 AAA is so outraged, it even paid for billboards to warn motorists traveling down 301 to beware that they are approaching these towns. END_OF_DOCUMENT_TOKEN_TO_BE_REPLACED Continue reading..