EVA fall in love with someone 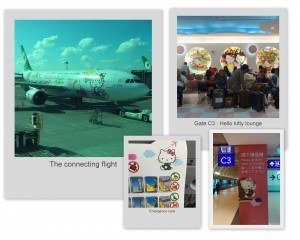 Dahlings, I am roaming in The Philippines to conduct some biz.

And just for the heck of it – and to annoy Caligula – I flew EVA AIR.  While outgoing flight was regular one, the connecting flight was a “Hello Kitty” theme.

Actually, we all know I am not THAT shallow. I chose the airline for price – it was almost 50% cheaper than what United were offering – and time – EVA was one of the quickest to get to Manila from Houston.

It was my first time time flying EVA and was impressed.  I was expecting bare bones budget but what I got was equivalent or better that what I get on United. The FAs were keen, attentive and friendly. My food was presented well and for airline food, tasty and a bit spicy. As for leg room, I didn’t feel too cramped like I usually do when flying United and the plane was new and well kept. The In flight entertainment was ok but nothing to rave over but there again, I have given up relying on airlines to entertain me. I plan on being unimpressed and bring along my own media which in this case, was an audiobook. END_OF_DOCUMENT_TOKEN_TO_BE_REPLACED Continue reading..

I took Patricious just to get him off his Xbox but I pre-warned him that what he will see, I may not have any explanation about why they did it. So off to 2401 Munger Street, we went – $5 for me but free for kids under 12. As expected I could not explain why or what this entire thing is about. Something about someone who liked oranges and collected random bits of stuff. I think Patricious now understands that sometimes people are just crazy but hey, no one was harmed in the making of whatever the orange show is supposed to be. END_OF_DOCUMENT_TOKEN_TO_BE_REPLACED Continue reading..