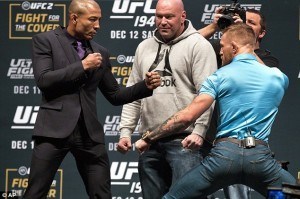 Dahlings, a recent JetBlue airline was turned around 25 minutes into the flight. The reason was a fight between two passengers.

Oh what’s so special about that Cleo as it seems to happen pretty regular these days?

Well they were a bunch of Irish men.

So, isn’t that a bit stereotypical?

I should mention that they were on their way to Vegas.

Hmm. But they were on their way TO Vegas not coming from it.

..Yes that’s correct. They were part of a big crowd traveling to support fellow Irishman Conor McGregor in the upcoming MMA match against Jose Aldo this coming Saturday.

But wait there is more. I almost forgot about an Irish prior passenger being kicked off for interrupting the safety announcements by singing which then delayed the flight quite a bit since the result was they missed the take off slot.

This is a beautiful story so I’ll let passenger Damien Coyne tell it. 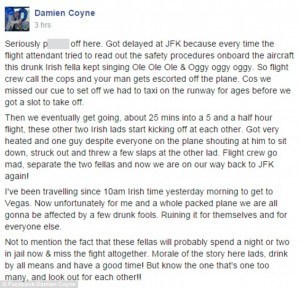 Speaking to MailOnline about the fight on board, Mr Coyne said he was ’embarrassed and angry’ over the incident that saw the plane return to New York. He also spoke of how the flight was already delayed out of The Big Apple when one man was removed because he kept interrupting the safety briefing.

‘I’m sitting in between a group of Americans on the flight and I heard them stereotyping the Irish when all of the drunken Irish lads got on.

‘I was angry listening to them talking about us in that way, then these two separate incidents happened and it’s these types of situations which do us no favours around the world.’

Mr Coyne, who lives in Kildare in Ireland, shared details of the incidents on Facebook. ‘These other two Irish lads start kicking off at each other,’ he wrote.

‘Got very heated and one guy despite everyone on the plane shouting at him to sit down, struck out and threw a few slaps at the other lad. ‘Flight crew go mad, separate the two fellas and now we are on our way back to JFK again.’

Mr Coyne alleges that the two men were ‘drunk’ and says that they ruined it for ‘themselves and for everybody else.

‘Moral of the story here lads, drink by all means and have a good time. But know the one that’s too many, and look out for each other.’

Yes Damien. There’s always one who ruins it for everyone else. Or maybe two. Wait make that three just like a clover leaf. 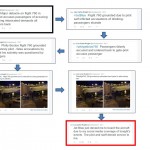