Tales of the Brazos Riverbank

For Memorial Weekend, Patricious and I joined some family friends for a weekend in Austin. The trip up on US Route 290 from Houston revealed many flooded side roads and fields. Just past Hempstead near the Brazos, there was a minor hold up near the river where local police were directing farmers across freeway to round up some livestock. It  not often that you see a cop holding up his hand to halt traffic on a 70 mph highway road to allow someone on horseback to cross.

After spending Sunday in San Marcos, we took the cross country route thought Bastrop which eventually brought us back to I10 at Columbus. The I10 traffic was moving so I was feeling very pleased with my decision to leave on Sunday to avoid the Memorial day traffic snarl on I10.  From experience, it is a terrible route to travel on holiday times, as it is only a 2 way freeway that cannot any handle the volume of traffic.

The queue on I10 to gawk at the Brazos Flood

Then we hit traffic stop just before Sealy. As we are now stationary, I look on Google maps and see stationary traffic all the way to the Brazos river. There was no indication of a wreck on the map and having seeing the degree of flooding further up North, and having just passed the flooded Colorado at Columbus about 20 minutes before (normally it is a passive river around there), I guessed it is related to the Brazos flooding.

Forty five minutes and 15 miles later, I confirmed that was the case but it was nevertheless stunning to see the degree of flooding at the Brazos having passed that same spot many times over the years. For those who know it, it extended past the DPS commercial vehicle enforcement station.

As we sped up, we notice some locals driving up the service road even though it was closed. While they may have made it out of this stretch, further up it was deeper. 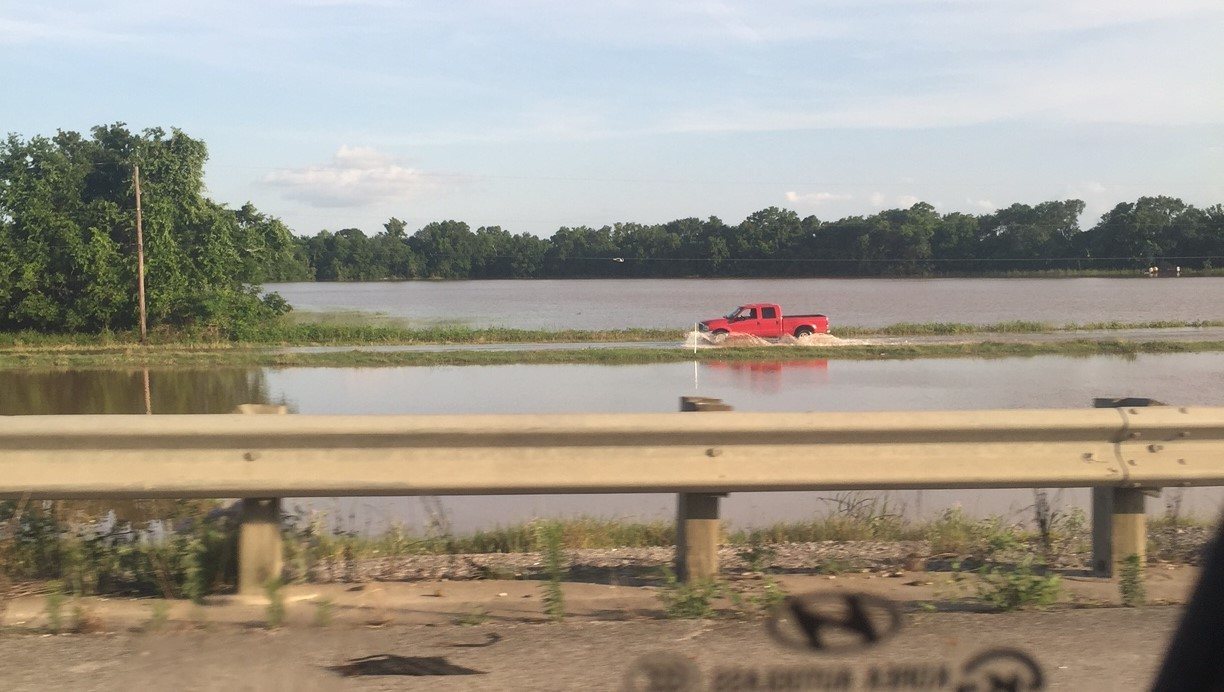 A Texas hellraser driving where Angels fear to tread – A local driving through the Brazos river flood water below I10: Copyright Roads-2-Roam