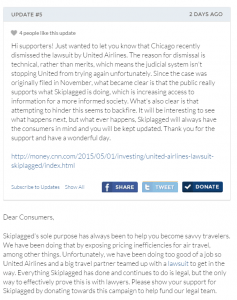 Roam got an email update recently from Skiplagged regarding their lawsuit where United was suing them.

The update is a bit meek in saying it was a ‘technical’ dismissal but CNN gives more beef. Basically the judge looked at it and said he had no jurisdiction over the case since the defendant neither lives in not does he do business in Chicago.

Ouch. That is not a good start.

By the way, United: you have invoked the wrath of the Streisand effect – Not many people were aware of ‘hidden fares’ until YOU brought it up.

You should fire your legal team and the idjiot manager who decided this was a good idea.