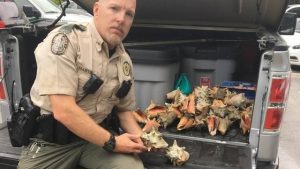 I’m sure she picks seashells by the seashore that are actually live Queen Conch AND that seashore is Key West, Florida, you are in big trouble. Which is exactly what happened to Dianna Fiscal-Gonzalez, 30, a Dallas mother who got 15 days in Jail for being busted in possession of 40 Queen Conches hiding away in their seashells.

TV stations WFFA of Dallas has a bit more to the story where it interviews the brother of mollusk moll. According to the bro, Diana didn’t actually take any of the shells but took the hit for her kids.

So what is this law then? From the US fish and wildlife website:

“Queen conch was once found in high numbers in the Florida Keys but, due to a collapse in conch fisheries in the 1970s, it is now illegal to commercially or recreationally harvest queen conch in that state. The United States is responsible for the consumption of 80% of the world’s internationally traded queen conch.”

If  just shells, it is ok to pick but not if they contain live Queen Conches as this makes it poaching. Got it plebs?

Back when I wore the purple in the original Rome, I once declared war on Poseidon, god of the sea, instead of invading Britain. Being the brilliant general that I am, I ordered my Legions to throw their spears into the sea. After a glorious victory, my brave soldiers collected seashells as war booty.

And what happened to me for this event? Did I get 15 days in Jail? No. I got assassinated. Blood e’ll. She got off lightly.