Let’s say you had spent $13,000 for a package that apparently included flights, ocean views and gourmet food what did you get? 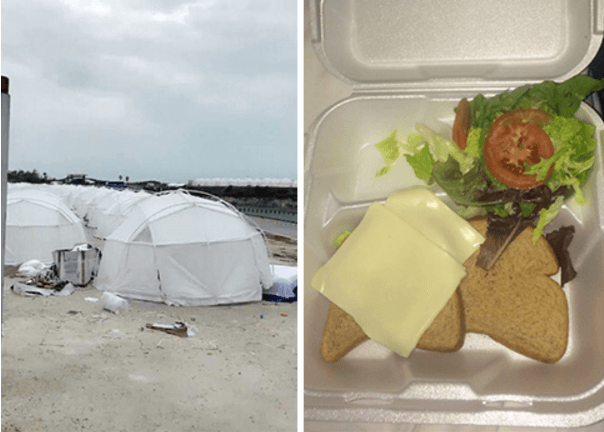 We’ll you got a FEMA tent on an unfinished site. Food was a cheese sandwich if you were lucky. As a bonus you may have got robbed by the locals. The music event didn’t even have a stage. The headliners, Blink 182, had called in previously to say there weren’t coming.

Fyre was being promoted by ‘Ja Rule’.  Who ? Exactly, so if you like me and you’d never heard of him, he is a “American recording artist, singer, songwriter and actor from Queens, New York”.  Ja’s real name is Jeffrey Atkins. Born in Hollis, Queens, he debuted in 1999 with Venni Vetti Vecci and its single “Holla Holla”. Still never heard of ‘im.

Mr Rule had a fellow business partner, you know. Billy McFarland. Mr McFarland prior business experience was with “Magnises” which was a form of a social club that aspired to be an AMEX “Black Card” for millennials. Except that it wasn’t really a charge card like Amex but a reward card that copies your credit card where info from the magnetic strip card is copied across. All that for $450 (but now $250) but it is ‘by referral only’.  I guess it you can call it Magnis envy? Proof that the size of your Magnis doesn’t matter.

And what did you get for the ‘exclusive’ membership from Magnises. From Spin;

If not for access to funds, what’s the point of signing up? Magnises promises its members “valuable benefits and members-only offers.” The company’s website currently advertises small discounts on services from startups like Cleanly and Handy, plus a list of past Magnises perks, such as access to reserved tables at the season-opening night of the Southampton nightclub AM last year. Many of the listings on the site are for offers that have already expired.

Back in January 2017, Business Insider had an article “Members of a private club for ‘elite’ millennials want their money back” in which they said ‘But three years after the company’s launch, some members are complaining that the service hasn’t delivered on what was advertised.’ Seven current and prior members were interviewed where they recounted ‘stories of not receiving tickets on the timeline promised, of having to rearrange plans multiple times because of the startup’s scheduling snafus, and of trips being canceled outright — sometimes the day before they were scheduled to take place’.

However, Brandon Wenerd  from “Brobible” gives the best write up on Magnises under “If You Live in NYC and Have This Exclusive Fake Credit Card, I Probably Hate You”.

“The most recent stupid rich kid obsession is a credit card that’s not even a fucking credit card. It’s called Magnises and it’s a rewards card that synchs to your other credit cards (where you pay the bills). It just tacks on a stupid $250-a-years fee for “perks” to some of the most idiotic shit YOU ALREADY HAVE ACCESS TO BY LIVING IN NEW YORK CITY.”

Ohhhhh… How faux-elite. Let’s breakdown how silly this all is:

There’s more and I recommend you read it for a hearty laugh at the pretentiousness of Magnises. As Brandon says “If you sign up for this service because “you want someone to curate your life” for you, you’re not just a sucker…”

But before we move back to Fyre, there was a follow to Brandon’s article where a reader shared his story about the benefit of the Magnesis townhouse. Apparently Magnesis membership is pretty handy if you need to find a clean bathroom in the West Village.

So it looks like Magnises members and Frye attendees are the same model. Promote a lifestyle of  the “it” people with glamour and exclusivity, charge a lot of money for membership, and ultimately fail to deliver.

The explanation on the fyre Festival site was a classic. Even better than Uber Travis’ “I need to grow up” apology. What is more Fyre expect to this this in 2018 where they will add more experts !

PT Barnum would be so proud. 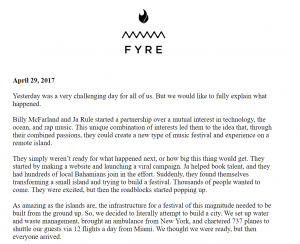 Fyre: It wasn’t me 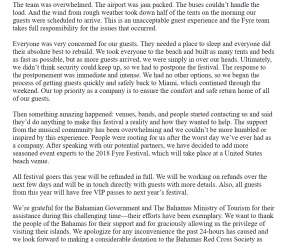 It was the Russians..