Warning: Cannot modify header information - headers already sent by (output started at /home/roads25/public_html/wp-content/plugins/HoverAlls/hoveralls.php:14) in /home/roads25/public_html/wp-content/plugins/wp-super-cache/wp-cache-phase2.php on line 62
 Pearls of Hysteria : Reality of catching a Vibrio Vulnificus infection from the Gulf of Mexico | Roads-2-Roam.com
0

Pearls of Hysteria : Reality of catching a Vibrio Vulnificus infection from the Gulf of Mexico 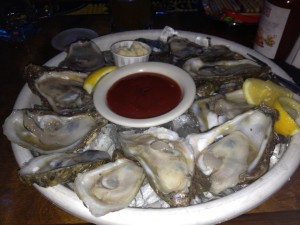 If you read the headlines “Florida resident dies from flesh-eating bacteria, officials confirm“, you may think this is an Ebola story. It is not.

It turns out that that victim died of of a seaborn bacteria ‘vibrio vulnificus’ which entered his body via an open wound. Not only that but the deceased had chronic health problems.

Is this something to be alarmed at ? No. This bacteria occurs naturally in the sea and flourishes in warmer waters. He was unlucky.

Vibrio vulnificus is also the bacteria that can sicken you if are unlucky enough to eat bad Oysters. For healthy people, this would be diarrhea only. For those who are immune supressed or unhealthy, this can be deadly.

The Emperors of Roam just love Oysters and we are well aware of the risks. We are very strict about eating Oysters in only winter months especially Gulf Oysters. Not only are they safer to eat in the cold water, but they taste better due to changes in glycogen.

Wake me up when December ends.