Not responsible for broken windshields? Oh yes you are.. 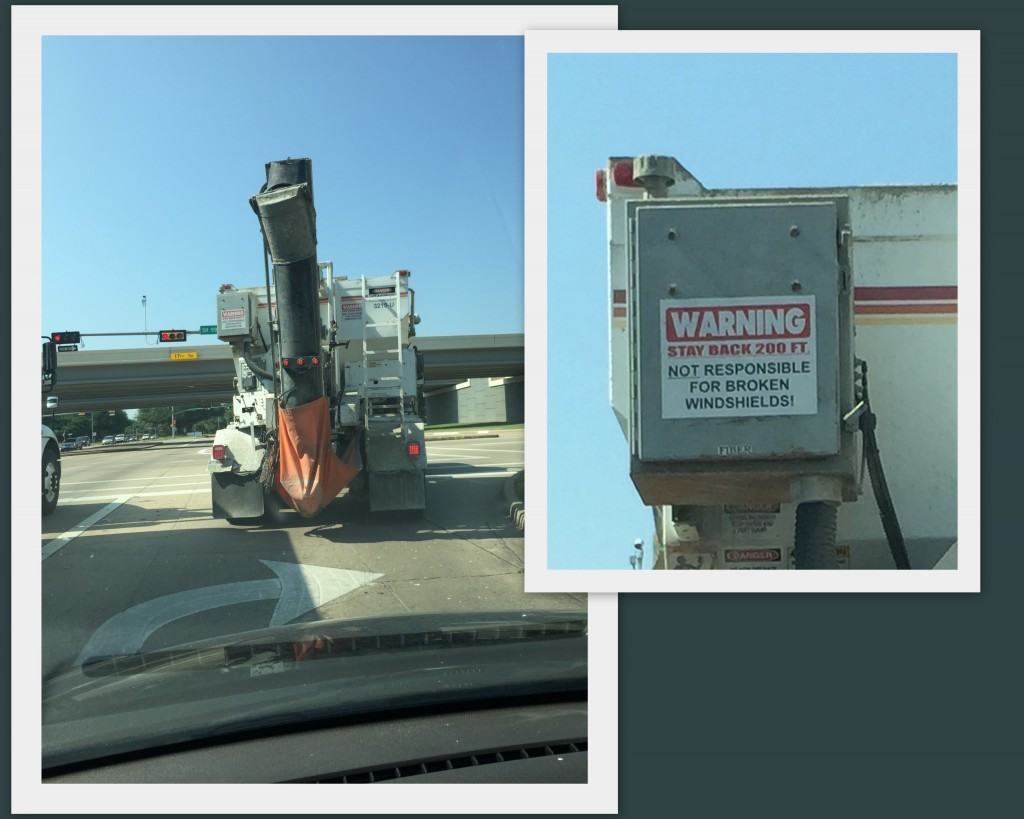 Signs of things to come..

Driving home from work, I noted a truck ahead of me which had a warning sign on it. Being curious I came up close to read what it said

However, the stupidity is that you’d need to be closer  that 200 FT away to read the flaming thing.

This had me thinking about the legality of such a sign especially as you need to be close up to read it and you never entered into any agreement with them. Researching around, I found this reddit discussion. My take away from reading it all :

Member “Richardscranium” has a good input

Okay, so my father works for the FMCSA (the federal authority for commercial vehicles) and here is his take on this. This truck can have all the stickers and signs they want on the truck telling you that they are not responsible for broken windshields but the fact is that the ONLY reason a rock is flying off a dump truck is because part of that load is not secured properly. Period, end of story. If the trucking company wants to argue this, kindly refer them the CFR part 393.100 and then let them argue, then call your local authorities and give them the information of the vehicle and file a crash report. Yes, this is a crash. That rock is part of the truck and it impacted your vehicle in the world of automobile crashes. I am a crash analyst, so I live in this world. Most, not all, states require all crashes where the combined damage is greater than $1000 to be reported. So tell the officer you aren’t sure and you’d rather be safe than sorry. Advise the trucking company you will be doing this because a crash affects their safety rating with the FMCSA. 9 times out of 10, they will play ball if their intimidation tactics do not work on you and you go in educated.
TLDR; Stickers do not matter. He is liable.

My wife had the windshield broken on her car a few years ago by a stone falling from a truck on the highway. I called the company and told them this and the guy repeated the “not liable because of the warning sign” crap. I told him I was calling the highway patrol to report the unsecured load and I had the license number of the truck. He started to negotiate real quickly at that point. Had the windshield replaced and the trucking company paid the bill. The pain in the ass and the potential fine were much more than the insurance claim cost. This is in NC, USA BTW.

In their Cars and Trucks section, the Houston Chronicle discussed this same topic back in 2010. Commentator “Al Zolli” gave the best advice

I have had the windshields on two different vehicles damaged by dry dirt and rocks falling off a dump truck and one time a large chuck of metal fell from the top of an ocean container causing over $600 damage to my truck and all three times I was successful in getting the truckers insurance company to pay for the damage.

The most important information you need to get is the trucking companies MC number from the tractor of the truck, using that number you can contact the Federal Government and get their insurance companies name. All three times they initially denied my claim, but when I sent a certified letter notifying them I intended to file a claim in small claims court and requested information on the truck they relented and repaired my vehicle.

That sign about staying back 200 feet does not mean anything and yes they are liable, you just have to be persistent. All three times the trucking companies told be to go to hell, well their insurance companies realized I was not going away and decided it was in their best interest to pay for the two windshields and repair the body damage. Do not take no for an answer.

TRUCK COMPANIES WITH THIS SIGN? FEED THEM TO THE LIONS.