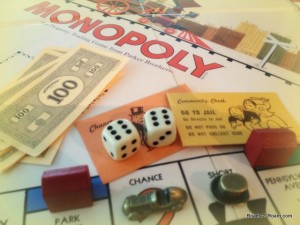 A well known board game but we do not remember it’s name.

After reading a news article in CNN Money, it seems like the Uber and Lyft are not getting along where Lyft is accusing Uber of dirty tactics by calling in rides, then canceling them last minute.

According to data provided by Lyft, 5560 rides were ordered by Uber affiliates then cancelled. The smoking gun is the telephone numbers from which the rides were ordered, cross-reference back to known Uber recruiters. One account in LA had 49 cancellations from October to May.

CNN also reports that Uber were busted doing something similar in a NY rival taxi App, called “Gett” and after that Uber agreed to “”tone down their sales tactics.”

“The taxi industry [is] trying to protect a monopoly that has been granted them by local officials, so they’re trying to slow down competition.”