An unfortunate ranking for Houston.

The key points to the story per the Chron:

Around 10:30 p.m., the driver of a 2006 GMC Sonoma pickup was traveling east in the 17600 block of East Freeway where traffic was slowing because of a lane closure. Investigators learned the unidentified pickup driver was traveling on the inside improved shoulder when he failed to control his speed and crashed into the back of a motorcycle.

The motorcycle was forced toward the inside eastbound lanes, striking the left side of 2014 Dodge Dart. The rider slid across the roadway into the center lane while the motorcycle hit a wall and caught on fire, authorities said.

At the same time, the Sonoma continued traveling east where it rear-ended the back of 2011 Cadillac CTS, authorities said. The Cadillac then crashed into the Dodge Dart before striking the back of a 2014 Ford F-150.

Some years back, a daughter’s boyfriend told me of the time when he got knocked off his motorbike from behind while waiting a red light in Houston. He was hurt pretty bad. The woman driver was drunk.

My first ever vehicle was a motorbike where it was my main mode of transport for many years. It was not that I didn’t like cars, but it was the only thing I could afford. A condition of getting the bike was a promise to my mother to take a defensive driving Motorcycling course. I learned a lot : about where on the road to drive; to be continually aware of the road – who is doing what ahead and behind; preventive actions to take when seeing a car waiting at a junction; the underlying assumption that the other driver has not seen you.

TxDOT has been running  ” Share the Road” motorcycle safety and public awareness campaign urges motorists to look twice for motorcycles at intersections and when changing lanes, the two places where serious motorcycle collisions commonly occur.

In 2013, 494 people died on Texas roadways while riding motorcycles and scooters. In 2012, that number was 470. This represents a 5 percent increase from 2012 to 2013. This uptick shows we still have work to do to save more lives in 2014 and beyond. TxDOT lead-campaigns, such as Share the Road, aim to heighten the awareness of Texas motorists about motorcyclists on the road to help reduce the number of crashes each year.

Pretty sobering where you look at some of the information behind it.

Since moving to Texas, I have toyed with the idea about getting a motorbike again especially for the cooler months. However, after observing the caliber of Texas drivers, this idea has remained just an idea. Houston drivers are particularly aggressive and feckless. 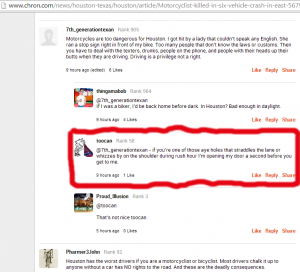 Screen dump from Chron illustrates the problem of a driving a motorbike in Houston: other drivers

The comment from user ‘toocan’ to the Chornicle accident report illustrates the behavoral threat from drivers to Motorcyclists: “if you’re one of those aye holes that straddles the lane or whizzes by on the shoulder during rush hour I’m opening my door a second before you get to me“.

The fact that he advocates intentionally causing an accident is a problem. Many of my biker friends say this spite is endemic here.

Others are saying same thing about Houston and motorbike riding. From a 2006 ‘Houstonarchitecture’ discussion board where someone asked

“I am moving to Houston this winter and was considering to getting back to my favorite way to get around in my student years – getting a small motorcycle or even a scooter. .. A few Houstonians I shared this idea with told me that I should reconsider – the drivers in Houston are reckless etc. Are there riders out there? What do you think?”

The responses gave a good snapshot of the problems a motorcyclist faces in Houston where though from 2006, not much seems to have changed.

“..I personally would be afraid to ride a motorcycle here in Houston as I find the drivers to be restless lane changers and speeders; not a good combo for motorcyclists.”

“I don’t think you’ll have too many issues on the freeway, but I believe the surface streets to be another story all together. Drivers in Houston are very offensive (as a gross generalization), and only worry about where they’re going and how fast they can arrive at their destination. As a motorcyclist (in general – but especially here), you need to constantly reposition yourself to be in the best possible position should an idiot driver do something, well, idiotic. Once you get out in the country, riding is a pleasant experience ..”

“A Motorcycle would not be my first vehicle of choice for everyday riding in Houston. I have been riding for about 24 years, and around Houston and for about 10 of thoses. I sold my Harley back in 2003 and haven’t been riding except for the occasional borrowing my buddy’s extra Harley, and then only on a sunny day on the weekend. Motorcycle is NOT a good commuter choice in this town. Nobody uses signals except to flip you off, and they never look they just get over, and it doesn’t even matter if there is a SEMI in the next lane, they’ll plow right into it.”

“No “norms” on the freeways whatsoever. The concept of average speeds being faster as you move left toward the inside lane is nonexistent. You will change lanes continuously because of SO MANY bubbas, idiot drivers and a plethora of illegals driving well below the speed limit.

“If you signal to change lanes, plan on the car coming up in that lane to speed up. I don’t know what the deal is, but it seems to bruise peopls egos if you want to get into “their” lane. Even if it is obvious that you will not cause them to slow their speed of travel. They are weird here.”

So while I miss the fun of  riding on a motorbike around, the anti-social behaviour of self righteous idiots like ‘toocan’ prevent me doing it in Greater Houston.

I will postpone my desire for Motorcycle madness for safer places: I maybe mad but I am not crazy.