Misery Loves Company..Airline Companies that is. 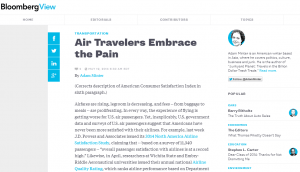 5/19/14: Bloomberg had an interesting editorial today that says that US air Travelers have never been more satisfied with their airlines.

Yes, the story quotes a J.D. Powers and Associates  2014 North America Airline Satisfaction Study and that “overall passenger satisfaction with airlines is at a record high.”

Oh my. Time to sit down even though I am already sitting. However, expecting to see the unexpected piece of news that air travel was now a pleasurable experience, the writer brings me back to reality:

On their face, the data seem to contradict a prevailing sense that U.S. airline service standards have been in decline for years. But dig a little deeper into the data, and something else becomes clear: Americans have finally begun to accept the idea that in an age of cheap, deregulated airfares, they get what they pay for.

I believe sociologists called this the Stockholm Syndrome. From wikepedia

..These feelings are generally considered irrational in light of the danger or risk endured by the victims, who essentially mistake a lack of abuse from their captors for an act of kindness.