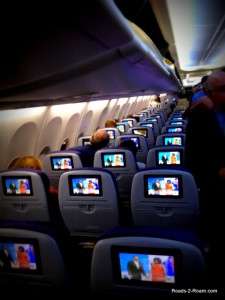 Which then brings up the subject of entertainment content. As a captured audience with not a lot else to do for the next few hours, you are a premium consumer.

As such the IFE will be controlled to entertain but also to subtly promote content.  They will be doing deals for certain content to get preferential treatment: Give you free shows  hopefully to lead you to subscribe on cable, show premium back catalog where Airline and content owner split the fees. You should expect the ‘free’ stuff to be a medium to promote something to you. I say that as during a recent flight with Delta, it continually plugged a new album by some musician that I had never heard off before but eventually remembered as I had no option but to sit through it. Every movie and TV show gave the same plug to the point that it was an  anti-commercial ! I now refuse to buy any of his stuff EVER or even mention the name on the internet just in case someone buys it.

Internet access is another item controlled. As bandwidth is a premium, the IFE is not going to allow you to stream Netflix or others so if you want to watch your own movies,  plan ahead to download to your device first.

So what about the costs? There is going to be a mix of charges with the new model and it will also depend on the airline. Internet access is going to cost regardless as this is satellite delivered though as of today, this tends to be available only over the main continents. Pay per view will depend on the airline and who they have cut a deal with. From what we’ve seen so far, HBO and Showtime are involved in offering their back catalog at least on Delta.

I am a big consumer of podcasts and audible books and I use flights as the opportunity to catch up on listening backlog. If I want music, then I also have Spotify songlist saved offline.  On a recent experience of flying on a new plane with United, they were pleased to announce that they had partnered with Direct TV for a super duper IFE system. After a ‘complimentary’ period, it then heavily promoted a pay per view for mainly sports or a snapshot of the worst of American TV. Since the flight was relatively short, I did not see anybody pay for it.

In fact, it brought out a negative side to certain IFE solutions and being a captured audience : The screens were so bright, it lit up the plane after the cabin lights were dimmed- see the picture. This was a major annoyance since I specifically did not want to watch any of the peddled TV crap and I couldn’t tune out the light pollution. I could turn my screen off  by turning the brightness down but it didn’t help the light coming from the rest of the adjacent screens. Even the empty ones would be looping previews. Not only that but even if mine was dimmed to minimum, any cabin announcement would reset my screen to a level that Clark Grizwold would be proud off.

I could not wait for that flight to end. So much for ‘entertainment’ and the song by Timbuk3 came into my mind : “The future’s so bright, I gotta wear shades”.

Claude : How about this to summarize your United IFE experience !