Lando hope and glory: Memoirs of a Super Typhoon 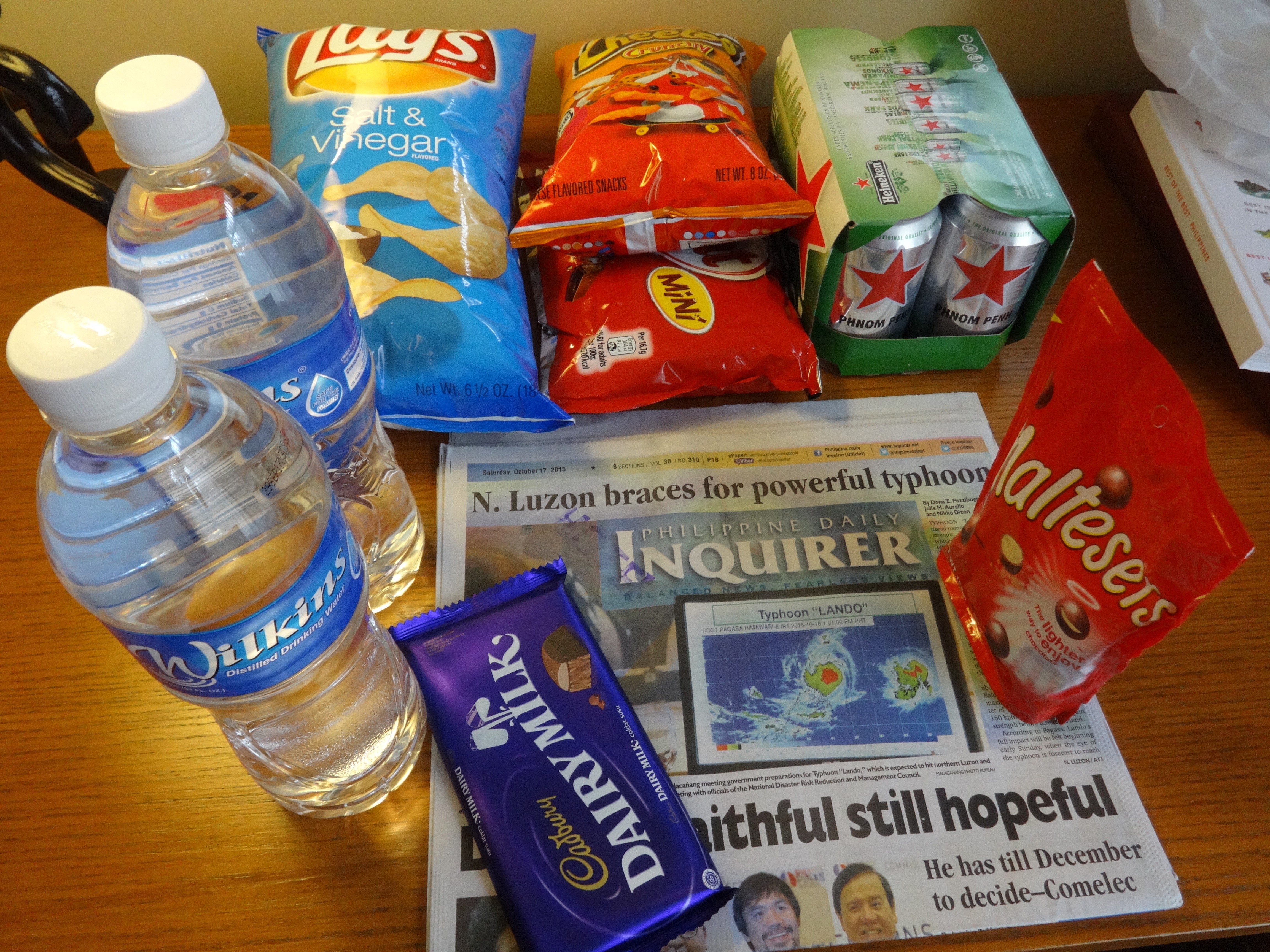 my emergency preparations for Lando.

Dahlings, I know you’ve all been worried sick about me so I should update you on my little business trip in the Philippines. It turned out that the others who were flying to meet me, bailed on me after looking at the weather alert. Something about a Super-typhoon being one of the worst ever made them change their mind.

So there I was. Jilted at the  hotel due a major storm heading my way and staying in the city that was projected to be an epicenter for 40+ inches of rain.

I naturally called up my local work colleagues as asked I should get back to Manila in order not to be stuck here in the aftermath. “Oh no, it will not be that bad. You should still visit us on Monday. Roads will be driveable on Tuesday.”, they cheerfully said.

Being a bit skeptical, I decided to stay since I had come all that way and may as well get something out of it. Decision made: I would have a short meeting on Monday morning and be on the road by lunchtime and even get back 1 day earlier than planned.

Saturday I bought a weather jacket and stocked up with essentials in case of power outage in my mini-bar:- see my picture. Saturday night the rain started and on Sunday, the strong winds came. By evening it had stopped. I had survived my first typhoon. Nothing to it.

Except it started again Monday morning and got progressively worse. My plan to leave to Manila for Monday afternoon was forbidden on safety grounds even if it has died down somewhat by late afternoon. After seeing rain fall from the gutter but not actually reach the floor, I kind of agreed with them. Ok, one more night then.

At night it blew some more and some more on top of that (it was a super typhoon you know), but by the morning, the wind was mainly gone. However, The rain was relentless. As I packed my bags, I received a call from my driver saying all travel had been cancelled that morning. Updates would be given at noon.

At noon, it was still verbotten to travel and got an extended checkout from the hotel where the next decision point would be at 3:00. 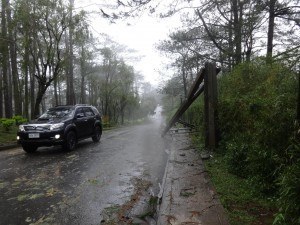 Being thoroughly bored by now, I decided to take a walk to nearest Starbucks about 1/2 mile away and saw trees fallen, trees snapped, plant debris of the road, shelters in ruins and even a concrete electricity pylon which had collapsed on itself. My weather jacket was unlikely to be the designer brand it claimed where it had the water resistance of paper. When I get to the Starbucks, I order a hot coffee to warm myself up as I a soaked through. I hand over my Amex to pay and find out it is cash only. Their internet was down preventing any communications and luckily I had just enough cash.

At 3:45 , we got ok to travel and quickly arranged a car to take myself and two colleagues down off the mountains. By the time we organized a driver, it was 5:30 pm getting on the road and we started to see why they said it was dangerous : Only 1 of the 3 highways out of the city was open and it was barely open. On one steep hill, the water was flowing down the road that earlier would likely have swept and light vehicle away with it. All electricity was out and there was thick fog.

When one of my  colleagues asked the driver to slow down – overtaking on blind bend in fog – the driver seemed puzzled “Slow down sir?” and gave a slight laugh as if we’d asked for something preposterous. He did for a while then it was business as usual when he thought we were no longer looking. 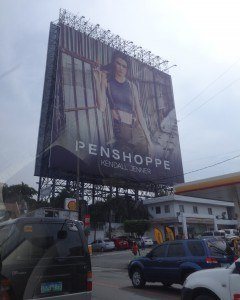 Once we reached the flat plains, the roads were ok and electricity returned. Even Manila was relatively quiet. While it was a hairy drive, it only took 1 hour longer that the normal journey.

As I looked up at the lights and advertising in wealthier parts of Manila, I cursed aloud at the unfairness of it all: The one particularly offensive billboard that I saw on the way up was still standing.

Damn you Lando to hell. You had one opportunity to redeem yourself and you blew it.