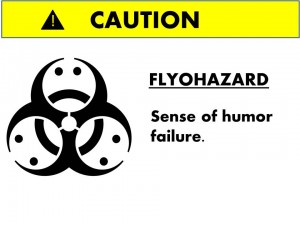 Dahlings, After sneezing on US Airways Flight 845 from Philedelphia to Punta Cana, a man allegedly joked to seatmates “I have Ebola. You’re all screwed”. Everybody laughed heartily and that was the end of that.

Oh wait a minute, I think I got something wrong.

What actually happened was that the plane was met in Punta Cana in the Dominican Republic by a Hazmat crew. Everybody was delayed by about 2 hours while the four man Hazmat team inspected the plane. The man was led away for medical testing where it was captured on video.

As the health crews got to the joking passenger, he can be heard on the video saying: “I was just kidding. I ain’t from Africa.”

Passengers can be heard booing when the man was eventually escorted off the flight.

I agree. I would have booed also: “I ain’t from Africa” is a terrible punchline. Hasn’t he seen ‘The Aristocrats‘?