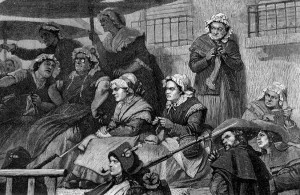 I guess you are imagining a mild mannered old lady doing her knitting, quietly wanting to recline. She just need a cat resting on her to complete the tranquil picture.

Having seen many bad horror movies, I am more skeptical of the quiet one. J’accuse the old bat of being a Tricoteuse. A Tricowhat you say? “Tea at Trianion” blogspot describes them better than I could:

Les Tricoteuses were the women who sat around the guillotine, keeping track of the number of executions with their knitting. They embodied the Terror of the French Revolution, for they seemed to be drawn to the blood and the violence, so consumed were they by hatred. When women are out for blood, they can be more ruthless than men, and far more cruel. Most of les tricoteuses, “the knitters,” were simple and ignorant women, manipulated both by their own passions and by the leaders of the various factions. The manipulation was facilitated by famine, war and social chaos, all of which spiraled out of control amid the violence of the Revolution.

Call me a conspiracist, but I recon she knew Ms Amy Fine behind her was resting her head on that table. Once those evil knitting needles were in her hands, she was unable to resist temptation of history and attempted a dastardly guillotine maneuver by swiftly pressing the recline button.

While others are taken in by this tangled web that this ‘Madame Defarge’ is weaving, she cannot pull the wool over MY eyes.