Iron man gets goodbye from Dubai 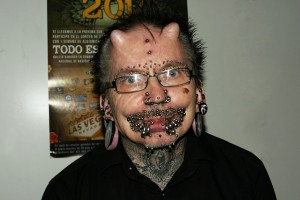 Dahlings, Dubai Government officials thought they had met they devil incarnate when the encountered Rolf Buchholz. So being like any rational Goverment Official, they refused him entry into the country. From BBC news:

The 53-year-old German has 453 piercings on his body and face, as well as two horn implants on his forehead.

Mr Buchholz told the BBC that airport staff said they feared he may be practising “black magic”.

The computer expert was recognised by the Guinness Book of Records in 2012 as the world’s most pierced man.

Mr Buchholz told the Associated Press news agency that he was initially allowed through immigration, but was later stopped prior to customs and put on a flight to Istanbul.

As a result, his scheduled appearance at the Cirque le Soir nightclub in Dubai’s Fairmont Hotel on Friday was cancelled.

Herr Buchholz, has 453 piercings of which 278 of which are around a certain part of the male anatomy.

So why customs and not immigration? Perhaps the customs officials didn’t want to bother checking his precious metals after he had answered the question”Anything to declare?”.

A bit scary looking. Surprised he didn’t set off the alarm at security check point.