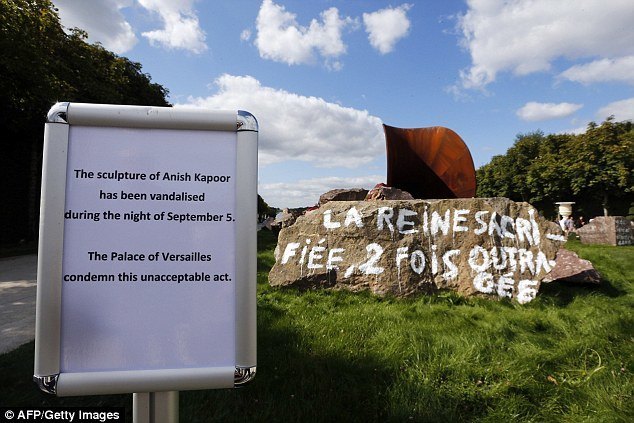 l’art pour l’art. Or something like that..Photo : AFP/Getty images

Dahlings, it seems those Parisians ‘ave bin at it again.

They are on strike you mean Cleo?

No, not on strike but someone has vandalized so called works of art that are associated with yer bits and bobs. Previously it was “The Tree” which looked to everyone as a Butt Plug, was punctured by an unappreciative person. This time they have written anti-Semitic graffiti on the Queen’s organs.

But isn’t Queen Elizabeth about to celebrate to celebrate being the longest monarch in British history. What is someone doing vandalizing the Queen’s organ? What does Price Philip have to say about that?

No silly, it is not THAT queen but Marie Antoinette.

I don’t understand. Isn’t she dead?

Yes she is but there is a sculpture in Versailles Palace by British artist, Sir Anish Kapoor that I will let the Daily Mail describe to you.

A controversial sculpture by a British-Indian artist on display at the Palace of Versailles has been daubed with anti-Semitic graffiti after being targeted by vandals for a second time.

The 230 foot-long metallic cavern, known as Dirty Corner, by Turner Prize winner Sir Anish Kapoor prompted criticism when it was installed at the French landmark as it is in contrast with the glamour of Versailles

Sir Anish also reportedly told a French newspaper that his work suggested the ‘sex organs of a queen.’

I previously wrote about this under “It’s tough to love Marie’s Muff”. Take a look at the sculpture and you’ll see why the French hated it. As mentioned above, the sculpture is know as “Dirty Corner” – not sure why as I don’t see any corners but there again, I am not a sculpture. The only similar thing I know about are Pyramids made of sand but I digress.

So what does Sir Anish have to say:

In a statement released following the vandalism, Sir Anish said the attack had brought to the ‘forefront the intolerance and racism in our midst’ at a time when thousands of refugees are arriving in Europe.

He added: ‘The vandalised sculpture now looks like a graveyard; the stones are now gravestones marking the ruinous politics of fundamentalist bigotry.

‘Dirty Corner allows this dirty politics to expose itself fully, in full view for all to see.

Oh la la but Sir Anish, how much more fully exposed can Dirty Corner be?

Not to condone the message of the graffiti which I can’t read anyhow since I don’t speak French – It is all Greek to me (a historical joke that I find rather amusing..) – but the Mr Kapoor should consider it as a artistic version of a Tramp stamp which I understand is all the rage these days.