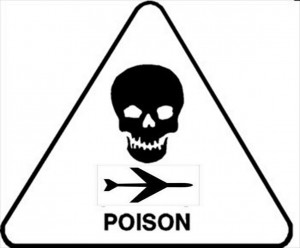 As if we don’t have enough hassle with flying: Is Your Airline Poisoning You? asks Bloomberg.

Richard Westgate. A former pilot with British Airways, Westgate died in December 2012 after more than a decade of illness that he believed had been caused by long-term exposure to jet-engine lubricants bleeding into cabin air. Samples of Westgate’s blood and tissue were provided to Mohamed Abou-Donia of Duke University Medical School, an expert in organophosphate poisoning, who published the results of his investigation late last month in the Journal of Biological Physics and Chemistry.

According to Abou-Donia, Westgate’s tissues were riddled with clear evidence of organophosphate poisoning, including significant brain injury. “It was the worst case I’d seen in all these years of doing this work,” Abou-Donia told me.

In theory, organophosphates — which are derived from jet-engine lubricants and the chemicals added to them — should not be floating in cabin air. All jets (except for Boeing’s 787 Dreamliner) pressurize their cabins using warm, compressed air that’s “bled” from the jet engines and recirculated through cabins. Seals are meant to separate the air from the oil and other chemicals.

Occasionally, however, those seals fail or leak and result in a “fume event” that contaminates the cabin. Such events happen with disturbing frequency: An online search brings up numerous fume events with human health impacts from recent years. A 2014 study by the Australian Transportation Safety board reported that it had received reports of “over 1,000” such cases between 2008 and 2012. While most were “minor in consequence,” others included “a single flight crew incapacitation event and a further 11 minor injury events to crew.”

Oh, the joys of travel.