Warning: count(): Parameter must be an array or an object that implements Countable in /home/roads25/public_html/wp-content/themes/focusblog/inc/configs/theme-options.php on line 379
 ‘Fat, drunk and stupid is no way to go through life, son’: Spaniards have had enough of drunken tourists | Roads-2-Roam.com

‘Fat, drunk and stupid is no way to go through life, son’: Spaniards have had enough of drunken tourists 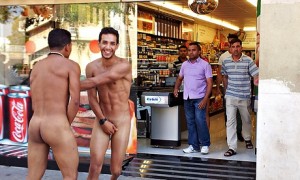 Dahlings, it seems like our Iberian friends are not only complaining about S&M hotels but the bawdiness of their visitors.

In Barcelona, there were local protests after some Italians tourists ran around naked for 3 hours without the police doing anything. A photographer from El-Pais, Vincens Forner captured them ‘in flagrante delicto‘. From the Guardian

“The tipping point was a trio of naked Italian tourists. As photos of the group frolicking through the La Barceloneta neighbourhood last Friday morning circulated on social media, some residents said they couldn’t take it any longer.

A hundred or so Barcelona residents took to the streets in several spontaneous protests this week, demanding that municipal authorities do more to help what they call a scourge of “drunken tourism”.

“Here tourists do whatever they want,” Vicens Forner told El País. A local photographer, he was the one snapping photos of the Italian tourists as they wandered his neighbourhood for three hours in the nude – even popping into a local shop – while horrified residents looked on.

Municipal authorities have been slow to address the situation, said neighbours. “We’re tired of low-cost, drunken tourism,” said Oriol Casabella, who leads the La Barceloneta neighbourhood association. “It’s killing our neighbourhood and dissuading other types of tourists. It’s Magaluf all over again.”

Ah, Magaluf. Also known as Shagaluf, is notorious for it’s drunken British tourists. For those who don’t about Magaluf, this vice.com article “A BIG NIGHT OUT IN… MAGALUF!” is an excellent review.

Earlier this year, An 18 year old girl hit the headlines where she gave 24 fellations in a bar in Magaluf in exchange for a free holiday. It turned out that ‘holiday’ was the name of a single free drink not the cost of her vacation. While her faux pas of not exploring the small details (oh a double entendre !) may be one of life’s little lesson, her real problem was that someone filmed it and posted it on the internet.

In a world that values privacy, nothing further happened but in a world that doesn’t, the press outed her. It turned out she was from a deeply religious family which in itself shouldn’t be a problem, but the press lapped that up (another double entendre ! Ha, I am on a roll today). From the Belfast Telegraph the headline: Magaluf girl: teenager who performed sex acts on 24 men was a victim of evil, say friends ‘We need protection in this world and somehow she dropped her Godly protection for a moment’.  I hope that if she was doing other things that night, she was taking more worldly protections rather than godly ones.

Not being a moralist, I wish the best for the girl in her time of embarrassment. As someone who did some scandalous things in my original incarnation in Rome and Egypt, I can tell you that time is a great healer. I had to wait a few centuries 😉

So while Spain has a great cultural side to experience, it also has it’s more uglier and cheaper side where in Britain this type of vacation is is known as 3S’s : Sex, Sun and Sangria.

I was going to give advice and say if you want to do these things go to Vegas since “What happens in Vegas, Stays in Vegas”. Then, I remembered Prince Harry. Then I read another recent vice.com article “Reasons why Las Vegas is the worst place ever“.  Reason number one : Everyone is drunk. Reason number two “Women Dress Terribly”. Reason number six ““Classy” Doesn’t Exist Here”.

Oh boy. Rednecks of Vegas vs bluenecks of Magaluf.

Still modern day Roam’ns cannot compare in any way to how ancient Romans used to love to a party. There was one big party in 79 AD where a firework party went a bit overboard. To this day modern day Neapolitans are still talking about it and using it as a tourist slogan “What happened in Pompeii, stayed in Pompeii”.

PS: For those wondering where the title of this article came from..one of Roads-2-Roam’s favorite films “Animal House”. How appropriate.

Hey Cleo, The DM covers this story. Their comments are funny especially the females lusting after the Italian men. It is a typical DM crap piece where their headline does not match their story: the nudists weren’t even British.

This is their headline “Brits out! Fury in Barcelona at boozy tourists: Locals in revolt over revellers from UK”