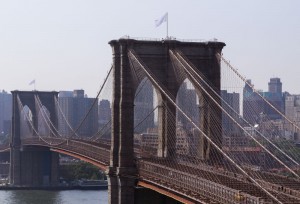 Source of the trouble. http://www.wermke-leinkauf.com/en/

It looks like the mystery of who placed the two white flags over the Brooklyn Bridge has been solved. The NYT broke the story that it was two Berlin artists who did it as an art project. The date was chosen as the anniversary of the death of John Roebling, then German born engineer who built the bridge.

To recap, this incident had caused major embarrassment to the NYPD where the two US stars and stripes flags were replaced by two white ones right under their noses in the early hours of the morning.  NY’s doughnut eaters then assigned almost 3 dozen ‘crack’ detectives to solve the case.

On Tuesday Stephen Davis, the police department’s chief spokesman, invited them to return to New York: “If they want to come in and speak with us, we certainly would be more than happy to entertain them.”

Yeh, sure you will.

Hats off the two Germans – Mischa Leinkauf and Matthias Wermke -in that you had some balls to pull this one off. Andy Warhol would have approved on this but don’t go back to US for a while. Otherwise that fünfzehn minuten of fame is likely to be stretched to fifteen years in Sing Sing.

NY Politician’s and Senior Police Officers don’t want justice here, just revenge. You will be charged with criminal damage to their egos.