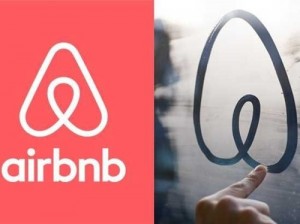 Dahlings, the characters in Roam’s Palatine hill laughed heartily when we heard the story of airbnb’s re-designed logo. (For those who do not know, Airbnb is a website where you can book individual rooms in someones house or even on a couch.)

So why did we titter so ?  If you read some of the original internet guff, then you would think it was a brilliant design.

The company embarked on a year-long brand study, during which it hired an outside agency, London-based DesignStudio, for assistance. The teams collected mounds of user research, traveling to more than a dozen countries to interview hosts and guests on what they loved most about Airbnb, then setting up camp at a back office in Airbnb’s headquarters to work in private. The team also performed detailed surveys of competing brands, concluding that too many technology companies, from Facebook to IBM, play it safe with a “cold, corporate blue color,” according to DesignStudio cofounder Paul Stafford.

Eventually, Chesky says, Airbnb’s design studio started to look like Russell Crowe’s workshop in A Beautiful Mind. They were overwhelmed with an absurd number of mood boards and brand identity studies, which included “the Red Cross, the Olympic rings, and probably the most important symbol of all, Batman’s,” Chesky says, only half-joking. But eventually, in what he calls a “drop the mic” moment, Chesky says he was able to distill everything the team had learned down to one core principle: “Airbnb is about belonging anywhere. The brand shouldn’t say we’re about community, or our international [reach], or renting homes–it’s about belonging.”

It turns out the new logo looks has a different visual meaning to many people. In particular a resemblance to lower abdominal regions of the different sexes.  We laughed harder when we found a tumblr site dedicated to alternative interpretations of the said logo.

While there supposedly nothing worse about bad publicity other that no publicity, I would have loved to be a fly on the wall on London based designers when they heard about the ho-ha. Afterall, they had spent many months on this and not recognized the design’s connotations.

Earlier this year, I flew first class with Southwest and all the luxury offering including a free in-flight magazine. I chuckled aloud in my Texas Champagne when I read this advert to get people to sign up for a franchise that gives “Brazilian waxes”. Their name : Lunchbox.

The crowning point was their logo of a women holding a pink purse over her probably now sore bits. I am still laughing at it. Thanks for the in flight entertainment. 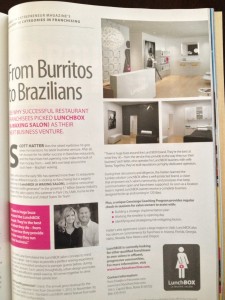 I see that Forbes picked up on this. http://www.forbes.com/sites/davidvinjamuri/2014/07/22/airbnb-attempts-to-rebrand-accidentally-renames-ladyparts/