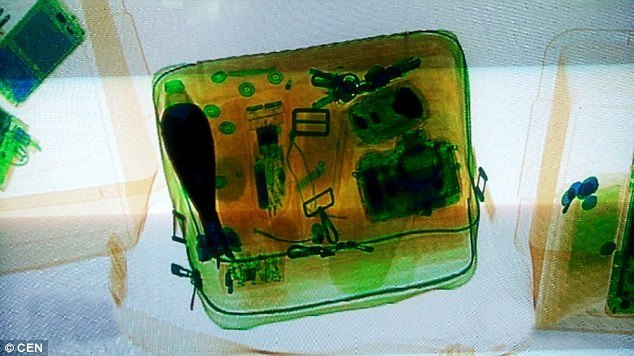 A case study in how to get arrested: Man with a funny shaped object caused a Kerfuffle at Xiamen airport.

Dahlings, when I wrote about the teenager who brought bomb shaped clock to Toronto airport in his hand luggage, I thought it was the hormones taking over the common sense part of the brain.

After all, no right minded adult would carry anything looking like a bomb in their hand carry onto an airplane would they?

Except Chen Liang, aged 39, tried to do exactly that in Xiamen Airport when he brought a souvenir which was empty artillery shell in his hand carry. What is more, after he was arrested he couldn’t understand what all the fuss was about.

An X-ray machine picked up the shape of the artillery shell. It sparked a security alert and the owner of the luggage was arrested.

Mr Liang said he had not thought about the problems it might cause when he put it in his hand luggage for his flight home from the airport in China’s Fujian Province.

Custom’s officials immediately quarantined the luggage. Liang was heard loudly insisting that the item was not dangerous.

Oh, it must be an airport thing then. After all, no right minded adult would carry anything looking like a bomb in their hand carry onto a train would they?

Except earlier this year, a passenger intending to board the London bound Eurostar caused the chaos at the Gare du Nord station in Paris when an artillery shell from one of the world wars, was found his backpack. The station was evacuated and the bomb squad called.

As for Mr Liang, his wartime memorabilia had cost him 100 RMB (£10). What an idiot for buying that and trying to bring on the plane. He could have bought that similar shell from the shop around the corner for only 75 RMB.