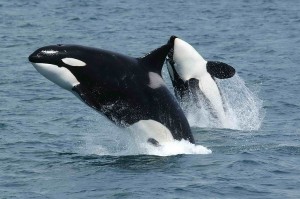 Just for record, SeaWorld has a counter response to Blackfish but it doesn’t change our opinion that it is a fundamentally cruel attraction.

National Geographic Opinion piece by Kenneth Brower, talks about the film and gives some more details behind the story and SeaWorld:

“Only once in history has a killer whale killed a human,” I wrote. “That incident, in which Tilikum, a captive whale in British Columbia, pinned his trainer to the pool bottom, drowning her, is generally deemed to have been horseplay, just a misunderstanding, a simple failure of the whale to appreciate the difference between human breath-hold capacity and his own.”

This was the explanation put forth by SeaWorld, which had bought Tilikum from Sealand of the Pacific after he killed that first trainer, 20-year-old Keltie Byrne. (Sealand, which immediately went out of business as a consequence of Keltie’s death, needed to liquidate its assets. Its orcas Haida II and her baby Kyuquot went to SeaWorld San Antonio. Nootka IV and Tilikum went to SeaWorld Orlando.) I had sense enough to question the horseplay theory. SeaWorld is a multibillion-dollar enterprise entirely dependent on the draw of its killer whales—orcas with reputations as playful and lovable, not murderous. I had little doubt the story had heavy spin.

The UK’s Guardian also has good analysis of Blackfish vs SeaWorld which tells of musicians such as Willie Nelson cancelling their gigs : Stoned Willie supports Free Willy.

Our dislike of SeaWorld boils down to the simple fact that we find it distasteful that such intelligent creatures are held captive in such small tanks for little kid’s entertainment. If you want to see them, go witness them in the wild in places like San Juan Islands in Washington state. By the way, Washington State banned SeaWorld from State waters due to their Whale collection policies.

Roads-2-Roam commends the move by Southwest and we will continue to not recommend SeaWorld as an attraction.