A visit from St.Humbug: Tale of the passenger refusing to be merry at christmas 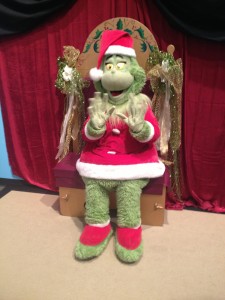 An unknown passenger on AA’s do not fly list.

In honor of the passenger who was booted off the America flight from La Guardia to Dallas after freaking out about being greeted Merry Christmas too many times, Ladies and Gentlemen, I present an abridged reading of ‘a Visit from St. Humbug’:

‘Twas the flight before Christmas, when all through the plane
Not a passenger was stirring, except one not named
The peanuts were handed out properly with care,
In hopes that Heather Cho would not be there.
The flyers were settled on a flight to Dallas
While greeting were given for a merry christmas
To bubba in his T-shirt, and I in my cap,
Had just settled our brains for a long winter’s nap,
When out on the deck there arose such a clatter,
I sprang from my seat to see what was the matter.
Away to the ailse seat I flew like a sword,
Tore open my iphone and started to record,
When what to my wondering eyes did appear,
but a passenger complaining about the christmas cheer
With a little old curmudgeon so whiney and quick,
I knew in a moment he must be a prick.
More rapid than eagles his hectoring they came,
And he whistled, and shouted, and called them by name:
“Not everyone celebrates christmas you know”.
“Now get on with this flight, for now we must go”.
The flight attendants were not so happy,
with the conduct of this miserable chappy,
They sprang to to cockpit, to tell the captain of the plane
about the irate nutter who was quite insane.
But I heard the captain exclaim, ere he walked out of sight—
“Happy Christmas to all, now get off my flight!”
He was escorted off the plane as they burst into applause
That’ll teach him to grouch and diss Santa Claus.