Underneath the Mango plane me honey

Dahlings, As I was waiting for thanksgiving dinner around Augustus’ house, I heard some tittle tattle from some fellow guests about a passenger on South African’ Mango Airline who caused some watery trouble during take off.

Later on and being bored with the guests who were now talking about some talentless Tart wishing to destroy the internet, I made some excuse to leave and research to Mango story. You see, curiosity had the better of me and I HAD to find out if it was Gérard Depardieu up to his old antics again. [Déjà  vu time? see  In the event of a water landing..]

However, I was shocked to find out it wasn’t a story about our Gallic Gerry, even though the headline and sub-lines sound just like him.

According to the Daily Mail:

The article suggested that the flight was delayed by 2 hours in Port Elizabeth, which may/may not have been a factor (but there I go again, expecting news papers to give facts).

Another internet source had a statement by Mango spokesperson Hein Kaiser.

“When the commander of a flight advises travellers to fasten their seatbelts, it is for good reason and is standard operating procedure on airlines the world over,” said Kaiser.

He said all the man had to do, if he was desperate to pee, was ask.

“In rare instances, when a traveller’s need for the lavatory is immediate and the urgency occurs during turbulent conditions, the captain may permit use of the ablution facilities.”

What the heck is “ablution factilities”?

I have not heard this word in this manner before. I always thought ablution was the act of washing oneself in a religious context. It turns our that in Urban dictionaries, ablutions’ is Army slang for ‘washing facilities’ or ‘toilets’.

Ah Ha ! Perhaps it was all a simple misunderstanding of vocabulary.

My old friends George and Ira had a song that fits this situation:

By now, after reading everything , my glass of Champagne (that was really Cava but don’t tell Augustus I knew) does not look so appealing.

Hey ho, time for  a Gin and Tonic. 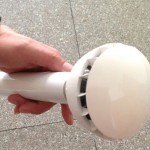 Proposal #3 Collar Perfect : ‘a pint-sized ironing device designed for the wrinkle-prone mover and shaker. All you do is plug in the iron and use it for quick touchups on your collars, pockets, pant creases, and hemlines.’ Really: Those who really care about this would just use/ borrow and iron. END_OF_DOCUMENT_TOKEN_TO_BE_REPLACED Continue reading.. 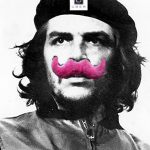 On my flight back to the US from LHR, we had a new Boeing 767-300. Great plane which on first impressions of the IFE, (In flight entertainment) looked as if it had lot of selection.

However, after watching 3 IFE movies that progressively went from bad to worse , I desperately need to moan and get my misery off my chest.

Movie #2 was “Into the Wild” by Sean Penn. I hated it and could not empathize with the main character, Christopher McCandless, who was messed up by his father and so goes off to live in Alaska without much planning. I just thought the character was an idiot. (I just looked up IMDb and it has 8.2 rating: Feck me..)

Movie #3 was “Noah” with Russel Crowe as the main character. I couldn’t believe this actually made it to a film.  I was appalled that some major stars – Anthony Hopkins, Jennifer Connelly (I used to have a crush on her) and Emma Watson – actually appeared in it. Noah was one of the worst movies I have seen. What is up with the rock monsters?

Unable to take any more, I turned it off and watched the in flight map instead. It was far more entertaining.

Dahlings, my friend Dolores O’Riordan has caused a stir on board a Aer Lingus plane from JFK to Shannon. Turns out she is accused of assaulting a flight attendant causing a fractured foot. Dolly was arrested upon arrival in Shannon and reportedly headbutted a Garda officer.

You may know Dolly as the lead singer from her band, “The Cranberries”. They has a hit with the little ditty Zombie’.

How I chuckled as I remembered some of the lyrics:

Then there is another hit, ‘Linger’.

Not one to talk about stereotypes, but I would be shocked I tell you, if I find out that someone from Ireland had over indulged with alcohol.
Ciao for now, Cleo. 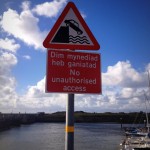 Continuing with UK road signs that made me chuckle, what about alternative meanings for this? 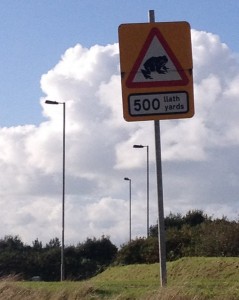 I saw this warning sign near Burry Port in South Wales: What was it warning me of?

– Attention : Spawn of the dead?

Since it was so close to Halloween, I’m officially scared.. Help Mommy 🙂