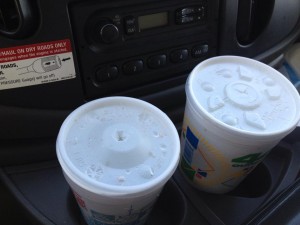 Our Improvised fish transporter. We had to remind ourselves not to drink during the trip.

This week, the Caesars moved 200 miles from our San Antonio palace to a new palace in Katy. Unlike previous moves which have been corporate relocation, we had to fund and arrange this one. Since some the imperial family members has flown the nest, we took the opportunity to downsize. Like most in America, we have far too much stuff than what we need.

The Saturday was the garage sale. Plan was from 10-4. However, as we started putting things out before 9 am, we had eight people wanting to see our stuff. Not being ready for it, we had to quickly adapt as more kept turning up. Augustus went out to get the Garage sale permit (San Antonio are pretty strict on this) and some smaller dollar notes, while Mrs Caesar became head of palace sales.

One of the first things to be sold was Augustus’ beer and wine making equipment. The buyer was passing down the road in his truck and made a hasty u-turn to return. From a distance, he knew what they were – a true Foamranger. While Augustus was somewhat reluctant to see them go, he has not brewed for years and the equipment was just taking up space. Farewell carboys, you are going to a good home.

The crowd attending the garage sale were a mixed bunch. There were many grandmothers looking for kids items, scrap merchants wanting to take anything recyclable for pennies on the dollar (even trying to get me to sell my bike that I told them many times was not for sale), older couples looking for something to do that day.